I have heard complaints through the years about how folks can’t really tell the difference between a Sprawl and a Burpee. Then, the other day we had done several dozen Burpees and were glad they were done. When the workout demanded we do some Sprawls after that, my buddy Dave was like, “really, Sprawls? They are basically the poor man’s Burpee.”  I had to laugh – he was right. A Sprawl seems like it is just a Burpee without the little jump at the end.

ahh, but there is more to these exercises than you think.

When it gets confused with the Sprawl is when you do Burpees the way I do them. Check out this video for a demonstration. This guy, as with me, starts out standing erect, but he doesn’t really go into the frog position, then the plank, then the Push-up.  What he does instead is he goes from the standing position directly into the Push-up, like he is basically falling down until his chest is near the ground. I enjoy this version because it is faster and more dynamic. Plus it saves my knees from being in the awkward frog position. To get up, I swing my feet out in one explosive movement so I am in a squat position, and then complete the Burpee from there.

Either version of the Burpee is acceptable, but when I talk about the Sprawl as seen in this video, you can see how closely it resembles the version of the Burpee I like. To make it even worse, I usually Sprawl all the way down until my chest touches the ground. I actually have to breath out so I don’t knock the wind out of me. This really mimicks how I do the Burpee. So for me, the Sprawl almost is a “Burpee without the little jump at the end.”

The differences are subtle. Check out the starting position for the Sprawl as seen in the image here. 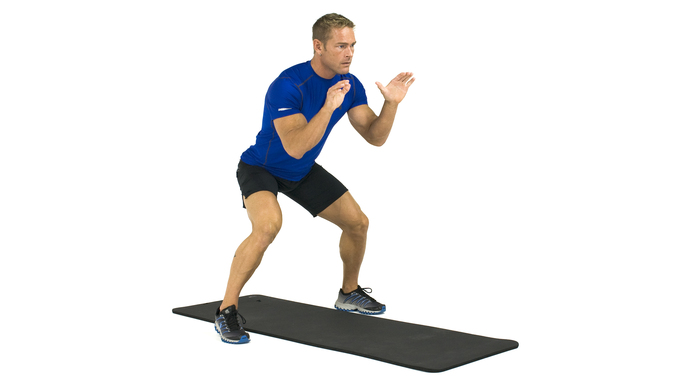 Notice this is more of a combat stance. The Sprawl is really about dropping quickly and popping up quickly. If I’m fatigued, I sometimes crawl up a bit, it is more of a fall, then a crawl back up.

However, the Burpee is not about falling and standing. It is about completing a dynamic Push-up with a Squat Jump. A Burpee does not start in the fighting stance. It goes from standing up straight,  dropping into a Push-up (whether dynamically or not), and then returning to the standing position (make sure you are standing up straight). The jump is then added at the end.

As you can tell, there are some variances for either exercise, which adds to the confusion. Just think of them this way. A Burpee is a complex Push-ups/Squat Jump. And for a Sprawl think of yourself as either at football practice or that you are in a game of dodgeball. Drop, get up! Drop, get up!

I hope this helps with the confusion, even though I doubt I debunked the myth of the Sprawl being the “poor man’s Burpee.”

2011 in review for Kemme Fitness