To begin this discussion, it may be helping to explain the difference between a Strict or Deadhang Pull-up (sometimes called Military Pull-up) and the Kipping Pull-up, which Crossfit has made very popular in the last decade.  Click here for a great article to explain it fully, however, I’ll make an attempt to summarize it for those unfamiliar.

As far as the Strict Pull-up, just picture you body hanging from the pull-up bar with your arms straight and all your hang simply hanging. Hence the term “deadhang.”  Now, tighten your body and pull yourself up without any swinging or using your hips at all. Most fit  folks can do from 1 to 10 of these without breaking form. 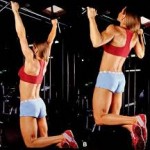 A Kipping Pull-up looks like a sloppy, cheating Pull-up, but it is actually a separate exercise. It involves using your hips, to raise your legs, which then in turn allow you to use even more muscles in your entire torso to swing back and up. Typically most people can double or triple their reps of Strict Pull-ups if they switch to Kipping Pull-ups.

This comes into play when you do tons of Pull-ups in a workout. Why?  Because unless you are uberhuman, you will switch from a Strict to a Kipping at some point because it is more effecient. The benefit of this, however, is you are now encorporating more muscles groups into your exercise.

I think of it this way, although, I do not have a degree in muscle physiology. When you begin a Pull-up from a deadhang you are using a lot of shoulders. As your face nears the bar, you use more and more of your upper back. Remember, though, this is a compound exercise, so you are using your biceps, triceps, as well as tons of other “assister” muscles. As you switch over to Kipping Pull-ups, you begin to using your hips and some lower frontal core muscles with more intensity.

Put it this way:  You do 100 Pull-ups mixed into your workout and your stomach will even be on fire. You’ll feel it in your biceps, your back and shoulders, and finally in your stomach. Talk about one hell of a compound exercise!!

So if you are one of those people who argue between Strict and Kipping Pull-ups, let it go! Let it go and do both. Start out doing them as a Strict Pull-up, and as your form caves from exhaustion, simply kick in “literally” your Kipping Pull-up form. The benefits will be enhanced by doing both.

NOTE: A Kipping Pull-up is not simply flailing your legs to get up. There is a specific movement and a rhythm. Click here to for a demonstration if you are unsure.

Another great tip for the Urban Run