As usual, I’ll give a touch of boring history to get things into context.  I have for the most part always hated running. I’ve done it. I didn’t die, but it is too mind-numbing for me.

In 2009 I broke my thumb and so I opted to run each day until it healed. At first it wasn’t that big of a deal. I had some coworkers to entertain me during the runs. It was almost fun, like a nice break from the intense Functional Fitness workouts. They were around 3 or 4 mile runs, so a nice 35 to 45 minute workout.

That is when I realized my problems.  I supinate, which is when your feet roll out to the side. I should’ve known this since all my shoes wear down on the outside and not the inside. The symptom I obtained was a flaring of my IT band at my knee.  I tell you, that stops you in your tracks pretty quickly. 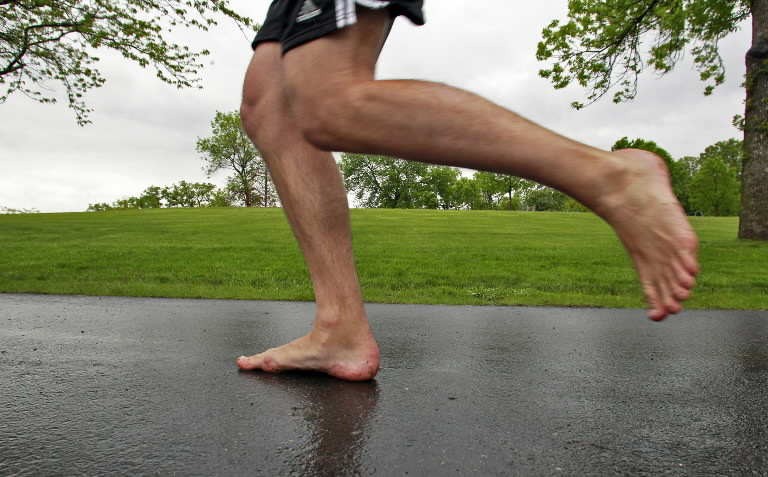 Next thing I knew and 2011 was the year for fitting in barefoot runs. I did 5 miles many times and even ended the good weather (I’m a fair weather runner) with a 7 mile trail run. I even wrote about Good Form running. I’ll speed up the history here: took winter off, didn’t do so well in 2012 and stopped really prioritizing the runs. This brings us to 2013.

2013 meant I didn’t care about running. Tried out a run in minimalist shoes, but my form was easily lost (barefoot was not an option due to heavy gravel). My knees ached again and I realized my form was horrible, yet didn’t care. So what if I couldn’t run a mile without discomfort!  So what!!  There!!

Then it hit me – when did I settle for not being able to run 1 stink’n mile? Really? That is when I got motivated and decided to make running a priority for me.  I now make sure I get in a mile around once or twice a week when it fits in well with my Functional Fitness workouts. I am starting slow and concentrating heavily on my form. In order to go barefoot-to where my form would self-correct-I would have to drive somewhere. Instead, I am working on concentrating with my Trail Gloves on to where I keep good form.  So far so good and my knees are doing well.

The point?  Well I need to be able to run a mile or two without a problem. If not, I can’t claim to have an excellent level of fitness. I will not settle! I will not give up!

I have no problem saying I hate running, but I won’t say that I can’t run.

Try Pavel’s “grease the groove” to enhance your strength

Designing a fitness blog is challenging